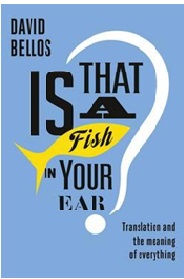 This is David Bellos new book and it will be of particular interest to people who love languages, history and culture. It is not just a book about translation; it is about human experiences and communication. According to Bellos, we can learn about ourselves by inquiring into the ways we deal with the languages other people speak. He takes us to a journey from the days when the Greeks simply ignored other languages and the Romans forced all subject peoples to learn Latin.

After all, maybe our way of dealing with foreign languages has not experienced any changes. The acceptance of English as a global lingua has lead to the situation where attendees to international conferences and events are expected to communicate in English. We can also see that English native speakers, when travelling, expect people from around the world to speak their language.

The book is not just about literary translation; it is about all sorts of translation, and the unrecognised importance of the craft, from reading the instructions on an IKEA flat-pack to the gathering of world news, the translation of jokes, the difficulties and political pressures of simultaneous interpretation—and a whole lot more.

This is not a book about translation but an original cultural history. It starts with apparently simple questions. What is translation? What do translators do? What does this ability tell us about human societies? How do the facts of translation relate to language in general?

Translation is relatively new discipline. For many centuries, even millennia, the world existed without translation. The people of different nations simply learned enough of the neighbour land language to communicate adequately. Marco Polo used a mixture of languages to describe his travels, probably without realising that many of them were “foreign”.

With the invention of the printing press the nature of words began to acquire a settled meaning. Nevertheless, Mr Bellos says, the concept of a word itself is almost impossible to define.

His work is an exploration of the effects of language and translation. His examples are drawn from a wide array of sources: Albanian, ancient Hebrew, film dubbing and graphic novels, legal documents (huge amounts of translation required) and the Septuagint, the ancient Greek translation of the Hebrew Bible.

Mr Bellos also shows that the world is very eager to familiarise itself with English, both as a vehicular language and as a literary language. Of all the translations of books done in a year, 75% are from English.

This is a book for anyone interested in words, language and cultural anthropology.