Mark Zuckerburg is the facebook founder, like duh. Well, he recently visited a West African country; Nigeria on a convention to discuss how businesses can be boosted with the help of social media, facebook in particular. This, in addition to making some of the platform’s tech and apps more affordable, if not free of charge.

Here Nigerian officials confirmed that the social media mogul learnt a few Yoruba words. Yoruba is a language spoken in certain parts of Western Africa inclusive of Nigeria. It should be noted that the Hausa language was included on to the facebook platform s well. It is reported that Zuckerberg was impressed with the Lifebank, an app that connects blood needing victims with available blood supply.

It is undeniably true that social media is an important aspect in today’s running of businesses as the biggest part of the world’s population is hooked, if not addicted to social media and technological advancements.

It is reported that facebook has Nigeria as its largest market in the whole of Africa with about 7 million Nigerians logging onto the site daily not forgetting the 16 million monthly. 97% of them doing so on their mobile gadgets according.

His visit to Kenya

Mark’s visit to Kenya was popularized by the picture making rounds on social media network sites, eating Samaki, Sukumawiki and Ugali using his hands together with some Kenyan officials. The above foods loosely translated as Tilapia, spinach and pulp made out of maize flour. 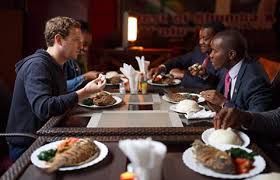 But the mogul flew to Kenya to do more than just eat. He apparently made a stop in the East African country to learn about mobile money services which are said to be a big deal in Kenya.